The Asian Hornet – watch out!

The public are being asked to look out for the Asian Hornet, also known as the Yellow Legged Hornet. Gardeners, birdwatchers, conservationists, sports enthusiasts – anyone who enjoys being outside – this means you!

This insect is originally from Asia, but was accidentally introduced into France in a consignment of pots from China in about 2004. Since then, it has spread throughout Europe and the Channel Islands. The first sighting in England was in 2016 but, in 2018 sightings were reported in Cornwall, Devon, Hampshire, Lincolnshire and Kent.

Why should we be concerned?

It is a voracious predator especially of honey bees, to which it poses a serious risk as it catches bees at the entrance to hives and can destroy colonies. But because it will kill and eat other pollinating insects, it also poses a risk to our general biodiversity.

Where am I likely to see it?

It is most likely to be seen collecting nectar on flowering plants, or later in the year on fallen fruit. When the many overwintered mated queens come out of hibernation in about March, each individual constructs a small ‘primary’ nest of papier mache, in which she raises her brood. These early nests are typically to be found in a sheltered location, such as a garden shed or under an eave, and look very similar to a wasp nest. Later in the year, a much larger ‘secondary’ nest is established usually high up in the canopy of trees which often makes it very difficult to see, even though it may be up to 90cms in diameter.

In the last three years, nests have been found and destroyed in Gloucestershire, Devon, Cornwall and Hampshire. The challenge is to prevent it becoming established in this country and, in order to do so, the public are asked to look out for it and, if it is spotted to report the sighting. Whilst Asian hornets can sting, they are not aggressive, and do not pose a risk to humans, unless their nest is approached.

What should I do?

If you think that you have seen an Asian Hornet, please report it to alertnonnative@ceh.ac.uk accompanied by a photo or a dead specimen. There is also an excellent app-Asian Hornet Watch which you can download onto your smartphone. This can also be used to report sightings and has photos of the hornet and other insects with which it could be confused, especially our native European Hornet. The hornets will then be tracked and their nests destroyed by trained operators.

Comparison between the Asian Hornet and our beneficial native European Hornet

Download a copy of the poster and help spread the word! 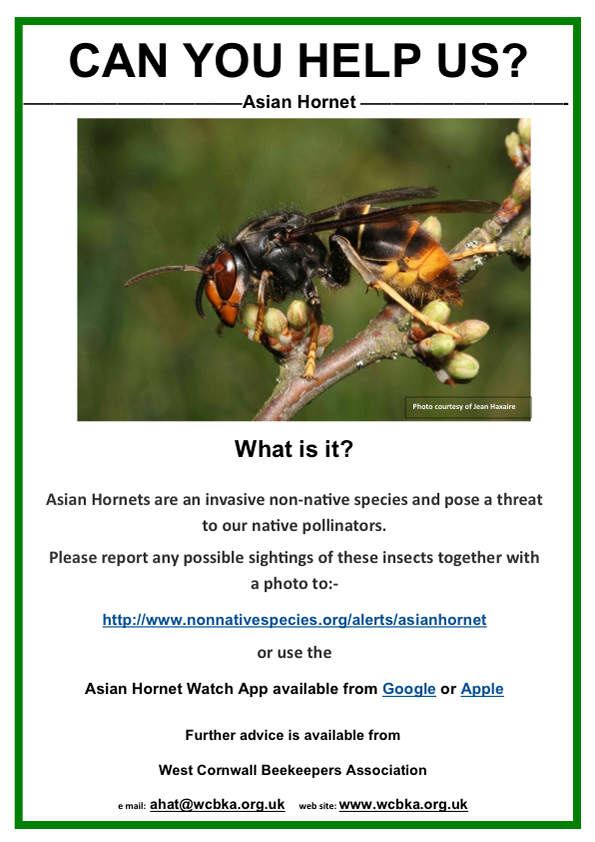